To begin with you will require the following:
a) a crate only large enough for the puppy to lie down comfortably stretched out
b) a schedule for going outside
c) treats for whenever you go outside with the dog
d) good observing skills to prevent accidents
e) patience 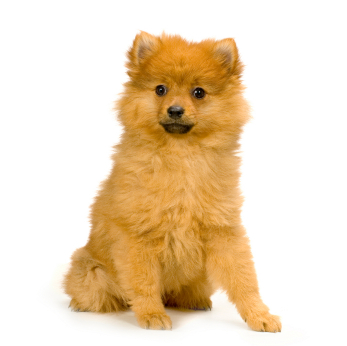 A) Crate
Crate the puppy whenever you’re away or can’t actively supervise, i.e. when you're busy around the house, sleeping etc. This will make him hold on so that you can have a success outside later.  If you find the puppy is soiling his crate, the crate is probably too large: the puppy can use one end as bed and the other as toilet. It may also have gotten dirty.
B) Schedule
Provide the puppy with a set schedule for eating and for going outside. If you are away for longer than 4 hours, have someone come to the house to take him out. Optimally, there is always someone at home during the housetraining period. A typical puppy outing schedule looks like this:

First thing in the morning and whenever the puppy wakes from a nap.
After each meal. This is often when puppies will have a bowel movement. You will discover your own puppy's rhythm.
Depending on the puppy’s age, every 30 to 90 minutes. Take the puppy outside to the same spot each time so he begins to associate the area with its purpose. Don’t interact with the puppy. If nothing happens after five minutes, bring him back into the house and crate him for thirty minutes. Then try again. If he does eliminate, he may have a free period in the kitchen or confinement area, or, better yet, a nice walk. This acts as an added bonus for performing.
A very young puppy (6-8 weeks) may need to go out once during the night.
C) Treats
Every time the puppy eliminates outside, lavish him with enthusiastic praise and a treat. If the praise makes him stop in the middle of eliminating, save it until just after he finishes.
D) Good Observing Skills
Puppies give signals prior to eliminating. It’s essential that you learn what these are so you can prevent mistakes. Common behaviours include circling, restlessness and sniffing. Whenever you see these, take the puppy out! Have treats and lead ready near the door.
E) Patience
Don't lose your cool. Most puppies will have accidents, especially in the beginning of training.  Since your puppy will only be loose in the kitchen when he is “empty,” mistakes will be seldom. Supervise so can take him out if you see him winding up.
If you see him starting to eliminate, urgently say "outside" and then get the puppy there as quickly as possible. Stay outside for the 5-minute period and praise and treat if he finishes eliminating. If not, bring him back inside and either supervise or crate him for another try later. Never punish as this may inhibit the puppy from eliminating in your presence.
If the puppy has an accident in the house or in the crate and you did not see it happen, it is futile and detrimental to punish him after the fact. Simply clean up the spot and then apply a commercial odour neutraliser. Vow to supervise more closely in future and/or add another outing to your schedule.
Dogs are naturally clean animals: given a choice, they will urinate and defecate away from their sleeping and eating areas. However, it is not obvious to dogs that carpets and floors are inappropriate elimination sites. They must by systematically taught to discriminate indoors vs. outdoors and to exclusively use the latter.

The key to housetraining is getting a history of rewarded trials in the desired area.

•       Decide where the doggie bathroom is going to be

•       Go there regularly: first thing in the morning, last thing before bed, shortly after meals, when he comes out of his crate and, in the case of a puppy, every hour or so

•       Confine to one room: never, ever give an untrained dog or puppy access to more than the kitchen or a small, easily cleaned area

•       Supervise whenever he’s uncrated, especially if he’s “full.” If you must take your eyes off him, even for a minute, crate him

•       Interrupt mistakes. Catch him as he starts to go, not afterwards. After interrupting him, hustle him outside to the bathroom area: praise if he finishes here. Then clean up the indoor mess

•       Never punish : if he made the mistake one hour or ten seconds ago, you are too late. It is unfair and abusive to punish late

•       Catch him in the act of doing it right: follow the rules so you are the good guy
TRAINING REGRESSIONS
Illness can cause a trained dog to regress as can a change in routine. A sudden diet change often causes diarrhoea that the dog can’t control. Many dogs do not generalise their housetraining to all indoor locations. This plus the stress of adapting to a new home may cause a trained dog to make mistakes in new surroundings. New owners must supervise closely to interrupt on time, and provide extra opportunities, with rewards, for newly adopted dogs to use their new bathroom areas.

Below is a lovely short video on house/toilet training