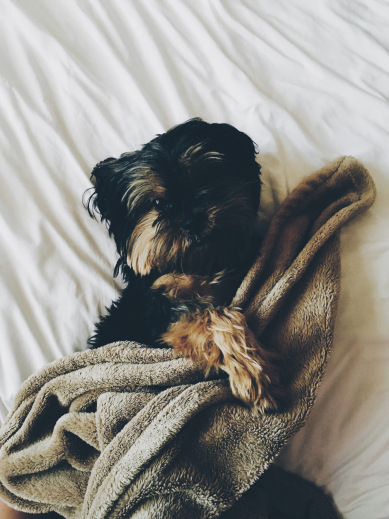 For many years, I have been lucky enough to run specialist puppy classes and have had the pleasure of working with numerous puppies of different breeds, shapes and sizes. During this time, there is not a lot that I have not been asked and it is lovely to hear people actively wanting to do their very best for their new charge. But there is one question I am asked on a regular basis and unfortunately, in my opinion, I am generally asked it a little too late – ‘when I left my puppy on the first night she cried and cried all night and should I let my puppy just cry? I have been told not to go down to her, it sounds terrible and she has cried every night for the last three nights. I could not bear it any longer and have now let her upstairs with me and she sleeps like a baby.’

Now, it is still widely believed that you should leave a puppy and let it cry it out and woe-be-tide you if you go down to see puppy as it is thought that if you do, you are making a rod for your own back. But it is my view that this is not the advice we should be giving new puppy guardians, instead ask yourself why is the puppy crying and howling in the first place?

Times are changing and people are looking at emotions in dogs and other non-human species and as dogs have similar brain structures to humans, it is widely believed that dogs experience emotions too. How these are labelled is open to interpretation, but I think we are all more than happy to agree that dogs experience a number of base/simple emotions, such as fear or joy. This is a vast and rapidly evolving area of study and if you want to know more about the research into emotions, you will need to do no more than carry out an internet search for Lisa Feldman-Barrett, Jaak Panksepp or Joseph E LeDoux.

Why is knowing about emotions relevant to us and our puppy’s first nights in their new home? Let’s imagine what it’s like for most well-reared puppies. Up until the point of being taken from their home, their world is probably very small and feels very safe; there will be puppy, mum, maybe dad and brothers and sisters, they will probably have seen a few human beings and be surrounded with familiar sights, smells and sounds. They would never have been left on their own, always having their canine and human family around them for company and care.

Then one day without warning, they find themselves suddenly taken from everything they have ever known and just as suddenly, find themselves in some strange environment, but it’s okay, they are surrounded by humans that are giving them lots of comfort and they hardly notice that their world has changed dramatically. Then, they are placed in a crate, in a room that they do not know and abandoned on their own. It’s dark and unfamiliar, they have no idea what’s going on and so they cry in the hope that somebody will hear them, but nobody comes. They cry on and off for hours, then sleep because they are exhausted. If they are lucky, somebody hears them and comes to see them, but then leaves again and so they cry longer and harder to see if they can get them to return, if they are unlucky, nobody comes until the morning and wakes them from exhaustion. 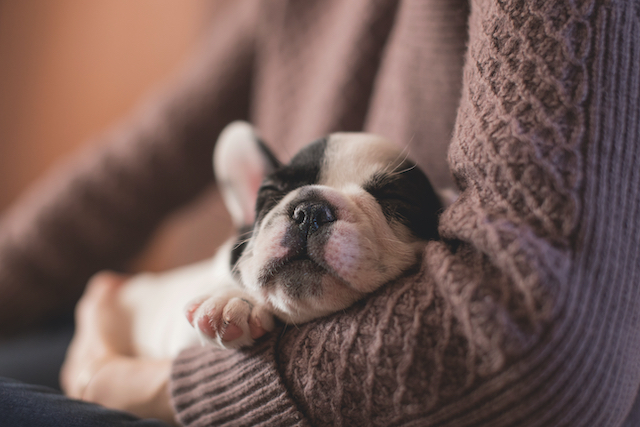 Now try to imagine how emotionally stressful this experience would be for you!

For all, these first nights will be unsettling to one degree or another, so if this sounds like a horrible way to start your puppy off in their new home, how could you make it less traumatic?

Firstly, think differently – what is wrong with giving your new puppy time to settle into their new home without feeling abandoned? Remember they have no idea we are coming back when we leave them. Let’s instead desensitise them to us going out of sight. Take some time off work so that you can focus on making puppy’s transition to your home as stress-free as possible – let’s face it, it’s a bit like having a toddler in the house and you may want some nap time!

During your time together in the first few days, why not spend time crate training puppy, teach them you will be gone for gradually longer and longer periods, give them food stuffed toys to help wear them out and give you some time to leave and come back.

Do this in conjunction with gradually leaving them overnight. You can do this in several ways and my favourites are either spending a few nights sleeping downstairs near to your puppy and over several nights gradually move further and further away, so that puppy does not feel abandoned, or allow the puppy to be near to you while you sleep – you could use a crate for confinement and this could be gradually moved further from your room.
Wherever you want puppy to sleep, start by making the sleeping area really comfortable and cosy. Make sure it’s warm and you could even look to use some familiar smelling bedding that you brought with them or something that smells of you.

I was quite fortunate in that I have always had other dogs in the home who were puppy-friendly and the puppies I have had were quite happy to be snuggled up near my other dogs and settled quickly into their new home.
Whatever method you choose, let puppy gain some confidence and find their feet over a few days, give them a chance to learn that their new home is a safe place and even though they may be left on their own, you will be coming back and will not have abandoned them.

There are several ‘calming products’ on the market which may help support puppy through the first few nights, some use aromatherapy and others use pheromones, which may help them settle.

Over the coming weeks, gradually prepare puppy for longer absences, it may feel like a lot of work, but believe me, in comparison to working with a dog who has separation issues, a few weeks on prevention is time very well spent.

I know there will be plenty who do not agree with me and will continue to carry on with the old way of leaving the puppy to tough it out, but what are we really toughing them out for?

If for no other reason than by taking a more humane approach you could be helping to prevent separation issues later down the line, then this has got to be worth the investment in time. As a bonus, you will also get a better night’s sleep and not annoy your neighbours.